In a routine drilling operation on a milling machine or drill press, a drill’s cutting edges rotate against a stationary workpiece. The opposite is true in holemaking on a turning machine where a stationary drill advances into a rotating workpiece. Either of these drilling methods produce sufficient reliability and hole quality for a wide range of applications. However, other tactics are necessary to produce more exacting tolerances and larger depth-to-diameter ratios.

Drill and workpiece rotation has a major influence on a hole’s concentricity – a key measure of drilling accuracy. When the drill alone rotates in a horizontal setup common for deep hole drilling, accuracy will vary as gravity acts on the drilling tool. A rotating drill can produce sufficient concentricity in relatively shallow holes, but performance will suffer as holes become deeper and less forgiving tolerance wise.

On the other hand, because the direction of gravitational forces relative to the workpiece constantly changes when the drill is stationary and the workpiece rotates, that arrangement can produce holes approximately twice as concentric as the rotating drill approach. While shops can perform rotating-workpiece deep hole drilling on a turning machine, a dedicated deep hole drilling machine using what’s known as counter-rotation will net much better results. 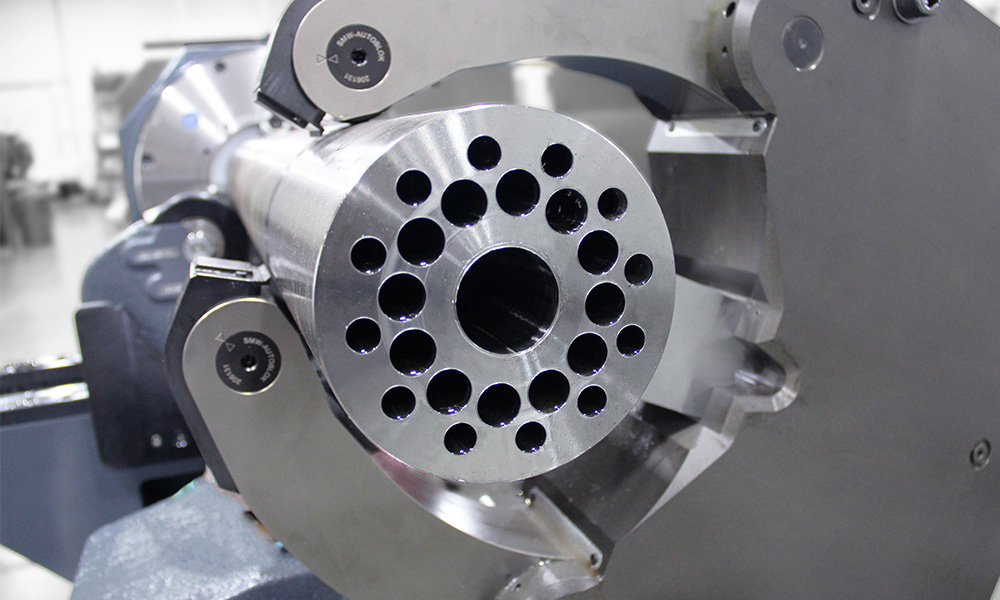 A drilling setup that involves both the drill and workpiece rotating in opposite directions will balance out drilling forces, which are never static in a constant net direction. The balanced forces keep the drill from drifting for a much more concentric hole. With the right equipment and setup, counter-rotation is possible for smaller gundrilled holes as well as larger holes drilled with BTA tooling.

In counter-rotation testing, UNISIG drilled a ¼”-dia. hole in a 30″-long, ¾”-dia. OD, 4140HT steel workpiece. This 120:1 depth-to-diameter application is one typically found in the production of power transmission shafts or aerospace linkages.

Drill drift at the 30″ hole depth was measured via ultrasound. With a rotating drill and stationary workpiece, drill drift was 0.026″; a stationary drill and rotating workpiece exhibited 0.015″ drift; and when both the drill and the workpiece were rotating, drill drift was only 0.009″. It should be noted that results will vary due to many factors, including material, depth-to-diameter ratio and the specific tooling involved.

Even with careful application of drill and workpiece counter-rotation techniques, typical machining centers – if equipped for counter rotation – usually do not have the alignment capabilities needed to consistently produce high-quality holes of 20:1 or greater depth-to-diameter ratio. Superior alignment is critical in maintaining concentricity.

In dedicated deep-hole drilling equipment, the machine base, rotating bearing groups and spindles as well as tool and workpiece supports are all designed with alignment as a first priority. Deep-hole drilling machines also emphasize control of other machining and environmental factors such as consistent temperature maintenance.

Some machines not originally engineered for counter-rotation operation can be retrofitted with a secondary counter-rotating group, but the alignment processes needed to make the arrangement work will be challenging and expensive. Additionally, a machine originally designed to employ counter-rotation will be manageable for nearly any operator. Dedicated deep hole drilling machines, for instance, include operator interfaces that provide detailed process information and maximize control over drilling parameters to enable accurate, efficient and repeatable production.

Every deep-hole drilling application is essentially unique. However, general application guidance for counter-rotating operations includes allowing one-third of the total drilling speed to come from workpiece rotation and two-thirds from the drill. Operating parameters can then be adjusted to maximize drilling speeds and accuracy.

Such counter-rotation techniques provide a way to achieve accuracy and production requirements in deep-hole drilling and are especially effective when drilling holes of 40:1 depth to diameter ratios or more. Counter-rotation generates higher levels of concentricity that enable use of optimal feed rates while also extending tool life. The result is production of more parts per hour with fewer tool changes.